The town of Guimiliau is a real place for art lovers and tourists keen on discovering some part of Brittany identity. Indeed, its churchyard is considered as one of the more splendid of the Elorn Valley. It is true that it has all the assets: a church, a bell tower, a porch, a sacristy, a chapel, an ossuary, a baptistery, a prayer pulpit, altars, a church organ, embroidered tapestries…

Environment
The concentration of artistic wealth within Guimiliau’s churchyard reminds visitors about the opulence of the 16th and 17th centuries. At this time, the town benefited from the linen trade. The monumental entrance opens up a perspective on a whole architectural ensemble. The church, mainly dated from the 16th century, is flanked by a Beaumanoir bell tower, a porch and a sacristy. The huge ossuary, built in the middle of the 17th century, was turned into a chapel devoted to Sainte Anne. There is still an outside pulpit from where the rector would harangue the parishioners.

History
The monumental calvary of Guimiliau was built at least by two artists between 1581 and 1588. An engraving may precise the name of one of them, but there is no way to confirm that. However, the treatment of the sculptures enables to distinguish two different styles. The way to notice these two styles is to observe characters’ look, and see that it was treated differently: in one way, realistically, and in the other way, figuratively.

Architecture and sculpture
The calvary is composed of a massive stone block embellished by four buttresses in which arches are drilled. Some stairs give access to the platform from where the celebrant would preach. The only one cross, erected on the top, is the result of a restoration conducted in 1902 by the sculptor Yann Larc’hantec. An impression of movement emerges from this ensemble gathering more than 200 characters. This feeling is expressed to visitors through draperies, wearing undulating and sinuous folds.

Remarkable scenes
– In the folk tradition, Katell Golet (Catherine the lost) was a young woman who promised to marry the first suitor who make her dance a whole night. One day, after she wore out her suitors, a young man drove her in an interminable dance. She had no choice but honour her commitment. This man was in fact the Devil and he sentenced Katell Golet to the depths of Hell.
– Emmaus pilgrims constitute a unique scene in the iconography of the seven monumental Breton calvaries.
– The four evangelists take place on the four buttresses. They are represented with their own symbols: the eagle, the lion, the bullock and the angel. 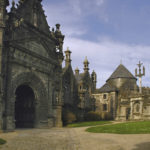 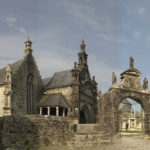 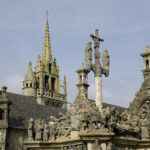 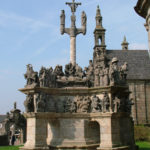 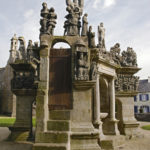 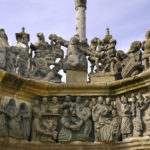 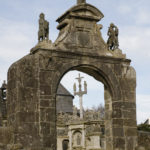 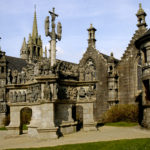