Guéhenno, listed as a Rural Heritage Town, possesses within its territory the only one great calvary in Morbihan, far from the Breton dioceses of Cornouaille and Léon. This surprising monument takes place in a forest and undulating landscape, inviting for rambles in the countryside.

Environment
The churchyard, bordered by natural surroundings, is composed of a church, an ossuary, a great calvary and a cemetery. Each part has suffered from some tumults. Indeed, in 1794 under the Terror, Republican troops destroyed this architectural ensemble. The church built in the 16th century was burned down and the great calvary suffered from huge damage. Fifty years later, the church was rebuilt and the calvary was totally restored.

History
In 1550, a man named Guillouic started to build Guéhenno’s calvary. We don’t know many things about the original edifice, except that it was almost totally destroyed during the French Revolution. In 1853, the arrival of the Abbot Jacquot in the parish sounded like the revival of the historical monument. Helped by his curate, the Abbot Jacquot carved some of the statues, in order to restore the monument, of which the vestiges were safely preserved in the ossuary. Besides, the Abbot Jacquot chose to add some new statues to the restored calvary.

Architecture and sculpture
This calvary, built at the centre of an architectural ensemble redesigned at the 19th century, is specific for two main reasons: the number of bas-relief that composed the monument and the iconographic side chosen to build this edifice. Its original plan consists in two rectangular massive stone blocks overlaid. On the west part, two other similar massive blocks with less volume are appended, but in restricted volumes. This ensemble gives a large space to the offering table and the platform. By watching the calvary, visitors can observe that the statuary, completely made in Granite, spreads out beyond the monument and around the altar, with the four prophets’ statues.

Remarkable scenes
– The Flagellation pillar shows the instruments of the Passion of Christ. The pillar is surrounding by a cockerel, in reference to Peter’s betrayal.
– The four Prophets Jeremy, Isaïe, Daniel et Ezekiel were added to the calvary in the 19th century by the Abbot Jacquot.
– The tomb of the Abbot Jacquot: it doesn’ take part of the calvary but it is in front of the monument. It is a way to remind that this man restored Guéhenno’s churchyard. 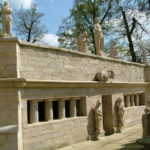 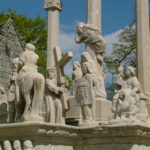 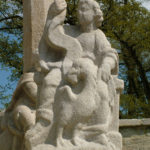 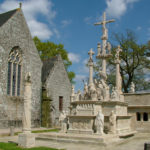 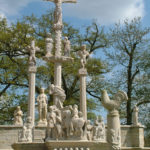 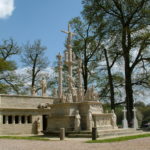 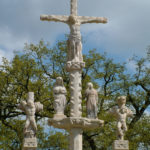 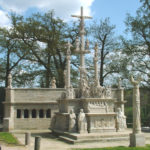