The town of Saint-Jean-Trolimon is a special stop on the Solar Winds road. In this town, the blue tones of the Atlantic ocean deal in harmony with the colours of tulips’ hatching in fields. The famous monumental calvary can be admired at Tronoen’s hamlet.

Environment
Facing the ocean, both the calvary and the chapel look like timeless. However, steles and votive statues found next to the calvary confirm that the place was occupied at the time by the Gauls and then by the Romans. Dedicated to Our Lady, the chapel is also named “Cathedral of the dunes” because of its location and the feeling that it inspires to visitors. It is interesting to notice that this construction, which is one of the rare Breton buildings to be arched, would date from the 1460’s.

History
The monumental calvary of Saint-Jean-Trolimon is famous for being the first monument of that kind built at that time. It was used as a model for the next constructions, especially by using massive stone blocks. The monument was dated through a comparative study of works of the same period: the Lantic glass roof (1450-1460) on which figures were represented by wearing clothes similar to the work of Saint-Jean-Trolimon. Today, this historical monument suffers from an important erosion of its motifs, due to the proximity of the sea and winds which are charged of sand.

Architecture and sculpture
The calvary, as the elder one, has inserted a special layout about the features of the monumental calvaries. Indeed, calvaries present a massive stone block with carved registers overcame by crosses of the Crucifixion. The statuary, made in Granite and Kersanton, may be the work of several workshops, which one could have been situated at Scaër.

Remarkable scenes
– Angels of the Crucifixion collect Christ’s blood while one of them spreads Christ’s hair.
– The Nativity presents an uncommon outlook of Mary. She is represented in nappies, her breasts denuded. – Christ’s baptism is represented twice on the monument. 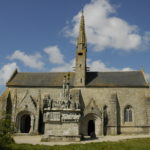 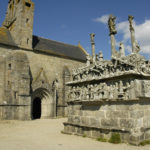 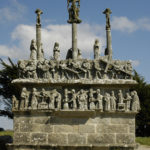 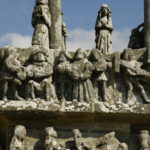 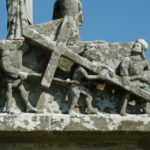 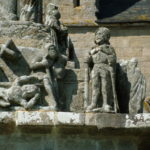 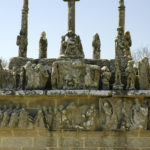 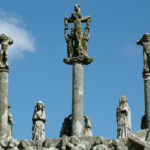