The town of Saint-Thégonnec Loc-Eguiner is located on a rolling territory, bordered on the east side by Coatoulsac’h stream and on the west side by Penzé stream. It is part of the catchment area of the Elorn, a place known for the exceptional number of religious monuments that have been built here.

Environment
As pretty often elsewhere, the churchyard states the prosperity of the parish at the time it was built. This wealth mainly came from earnings the executive body of the parish took from land rents but also came from the rise of the hessian industry. Thus, during the 17th century, Saint-Thégonnec got equipped with a churchyard built during several decades, in order to hold high the taste of art and the ardour for Catholic worship. This ensemble includes a church, a bell-tower-porch, a sacristy, an ossuary, a huge calvary, a monumental gateway, an organ altarpiece, a prayer pulpit, etc.

History
Built in 1610, Saint-Thégonnec calvary closed the movement of erecting huge calvaries which started 150 years earlier at Saint-Jean-Trolimon. The Master of Saint-Thégonnec, for lack of knowing his real name, is the sculptor of this monument. Another artist better known – Roland Doré, sculptor in Landerneau – would also intervened on the calvary and realised the scene of the Christ to contempt.

Architecture and sculpture
The three crosses of the Crucifixion sit on top of a rectangular massive stone block which presents small dimensions. Only nine scenes, all devoted to the Passion of Christ, garnish the unique frieze surrounding the monument. In fact, the crosses realised in a conventional way look like disproportionate in comparison to their dimensions and the number of characters the crosses exhibit. It has to be noticed that a skilled balancing act was set up to insure the monument’s stability through the centuries.

Remarkable scenes
– The scene of Christ in ties is the work of Roland Doré. Jesus is surrounded by two persecutors, whose one of them might be Henry IV’s caricature.
– Saint-Thégonnec is represented to illustrate a local legend: Saint-Thégonnec would convert the wolf that devoured Saint-Thégonnec’s horse which was pulling its cart during the construction of the church.
– The central cross posts on its bole the fallen branches of the tree which has been pruned for the Crucifixion. This detail is also a reference to the Tree of Life. 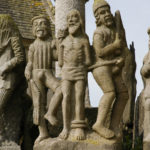 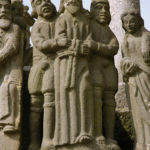 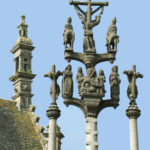 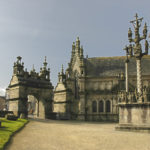 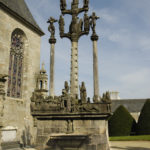 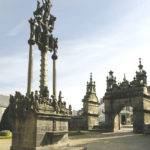 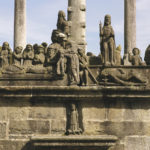 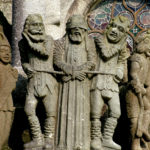