The name of this parish – Pleyben – is registered at Landevennec Abbey since the 12th century. Following a common toponymy, “ple” may come from “ploe” i.e. the parish, and “Iben” would be its founder. The town of Pleyben had succeeded in distinguishing itself by developing its commerce, when other parishes took advantage of the hessian industry. Today, Pleyben is a real touristic stop where it is possible to discover the churchyard, the chocolate factory and the nautical base located along the Nantes-Brest canal.

Environment
Pleyben has inherited from the 16th and 17th centuries – the golden centuries for the parish – a churchyard that impresses by its size and richness. It is composed of a church with a sacristy, a porch, an ossuary, a calvary and a surrounding wall where Gothic, Renaissance and Beaumanoir styles are harmonized.

History
The statue of Saint Germain above the porch reveals that a first calvary was built in 1555. It was probably located near the south side of the church. Another writing tells that the sculptor Julien Ozanne intervened on the monument in 1650 in order to sculpt several scenes as the Last Supper, the Entry into Jerusalem and the Washing of the Feet. Between 1738 and 1743, the calvary was moved and its structure was reworked. During this period, a triumphal arch was added to the calvary to give it a typical look as visitors can contemplate today.

Architecture and sculpture
The actual shape of the monument looks like a massive quadrilateral with four overhangs, on which are a frieze and a platform. The upper stone block, which was added when the calvary moved, plays a major role in the reading of the 30 pictures represented on the monument. Indeed, its incredible size gives a scattered appearance to the statues that are perched at an unusual height. Most of the sculptures are made of Kersanton, but some of them were carved in a fragile sandstone and thus, their preservation is delicate.

Remarkable scenes
– The two robbers Dismas and Gismas are both crucified with the Christ. Their names are written clearly under their feet. An angel and a little devil are represented in order to distinguish the good and the bad.
– The Renunciation of Peter constitutes a unique scene in the iconography of the seven monumental Breton calvaries.
– The scene of the Laying in the Tomb shows a wealth of clothing details and it depicts the expression of pain symbolized by tears on Holy Women’ faces. 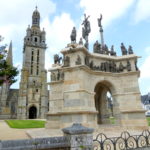 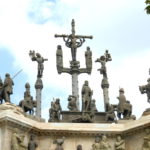 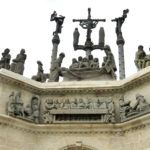 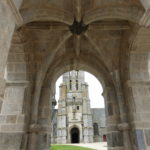 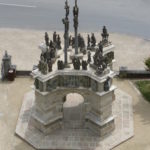 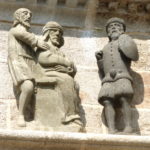