Marked out by vast pastures, the town of Plougonven is part of Rural Heritage Towns and Armorique Regional Natural Park, according to a remarkable natural heritage. The architectural heritage is also exceptional and it enables visitors to discover a churchyard, some manors and old farms which are the reflection of farmer wealth in times past.

Environment
The churchyard of Plougonven, even though it is located in the region of the Trégor, compares favourably with the famous churchyards of Léon region. The church was rebuilt in a gothic style, likely by Philippe Beaumanoir at the beginning of the 16th century. The ossuary, which presents a facade with bay windows in clover-shaped, was built at the same period. Christ’s chapel, even though it exists since the 15th century, is visited nowadays under a late aspect because of a dating from the middle of the 18th century.

History
The monumental calvary of Plougonven was built in 1554 by the artists Bastien and Henry Prigent, as a dedication is carved in the central cross. During the Terror events in 1794, the edifice was amputated from a certain number of its sculptures. Also the Crucifixion crosses were removed during the Terror, but they were rebuilt in 1897 by the sculptor Yann Larc’hantec, native of the town.

Architecture and sculpture
The calvary presents the particularity of adopting an octagonal plan, while respecting some custom in its rise. The latter is composed of a base surrounded by two groups of sculptures overlooked by the three Crucifixion crosses. Among characters’ clothes, outfits and accessories worn at the 16th century can be observed. Thus, these elements are staged in an anachronistic way for the figure represented. Visitors may notice the Resurrection soldier’s harquebus or the prominent flies, used as pockets during the period of Henry II.

Remarkable scenes
– The scene of Saint Yves standing between the rich and the poor is a carved group which doesn’t refer to the Passion of Christ but it shows the attachment of the population towards this saint to whom the calvary was dedicated. Saint Yves was known for making justice in a fair way.
– The group of the Adoration of the Magi portrays Balthazar as an African person, as if the wish of the sculptor was to personify all Humankind with Balthazar’s partners in crime Melchior and Gaspard
– The Devil of Temptation flaunts an inevitable fixed grin which gives a glimpse of two sculptors’ hand. 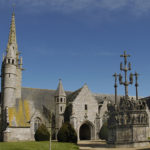 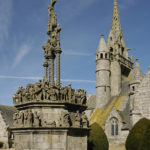 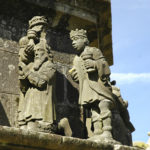 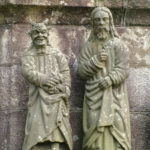 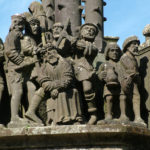 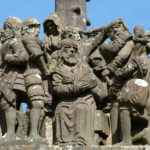 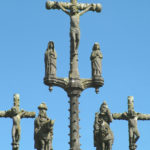